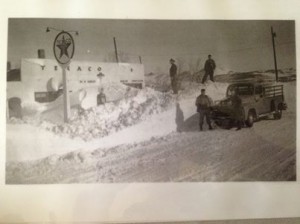 Before the completion of Interstate 90, Wyoming State Routes 14 and 16 were the primary corridors for travel from the east coast for tourists heading to Yellowstone, and east-west truck commerce. As more and more cars hit the road in the mid 20th century, demand increased along these isolated state highways for amenities – gas and service stations, bars, saloons, and restaurants.

However, after I-90 was finished, the vast majority of this traffic was diverted away from the 14/16 corridors. Stores closed as income dried up, and many towns shrank rapidly. Ucross used to have two service stations and a saloon (there is nothing but the ranch and foundation now)! Driving east from Ucross, you can see this history in shuttered store-fronts of small towns up to the South Dakota border.

Here’s a picture of what things used to look like at the Texaco Station during snow storms at Ucross!