Charlie and Devin were collecting data near the Stone House South pasture in the northern half of the ranch and in quick succession spotted a coyote and a badger den (see photo). This led to some speculating about carnivore competition and interaction, especially since we were near a number of prairie dog ‘towns’ at the time.

A quick literature review revealed this gem: “Hunting Associations between Badgers (Taxidea taxus) and Coyotes (Canis latrans)” (Minta et al. 1992). Apparently a single coyote and badger pair will often ‘team up’ to hunt ground dwelling mammals. The coyote will use its speed to trap small mammals in dens, while the slower badger will 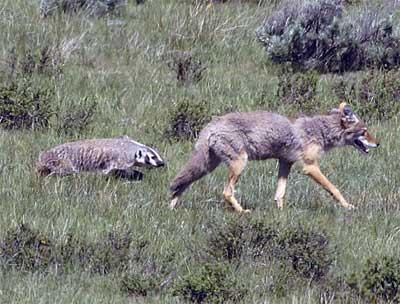 use its digging prowess to burrow and either snatch prey, or scare prey towards the waiting coyote. “Coyotes with badgers consumed prey at higher rates (P = 0.09) and had an expanded habitat base and lower locomotion costs. Badgers with coyotes spent more time below ground and active (P = 0.02), and probably had decreased locomotion and excavation costs.” (Minta et al. 1992).