Researching the impact of surface water to desert bighorn sheep (Ovis canadensis nelsoni) movement patterns, I have spent my summer maintaining trail cameras at water sources across five desert mountain ranges. Below is an example of typical fieldweek in the desert:

Monday: After lingering at the California Fish & Wildlife office for way too long, we drove four hours to the Nopah Mountains. It was a whopping 126°F in Death Valley’s Furnace Creek, and it felt like we were inside a hair dryer. We managed to hike the mile into the north Nopah Drinker before dark, but made it back to the car with headlamps. At camp, we saw the International Space Station through our spotting scope.

Tuesday: We woke up at 5:00 am and headed out to to another guzzler. We hiked the 45 minutes into the drinker, and spotted a ewe with a lamb approximately 300 m above the tank. The ewe spooked when she saw us. We changed the camera cards, proceeded back to the truck, and drove the two and a half hours to the Castle-Piute Mountains. There, we maintained the cameras at the Hart Mine Drinker.

We then proceeded up the old wagon road to Kidney Springs. It is mind-boggling to imagine the wagon trains using this route during the pioneer days; I assume that they were making their way south towards the Old Mojave Trail. After the half hour hike, we found the springs dry. One of the tanks was broken on the top, but this did not explain the lack of water. We removed the camera, assuming that the tanks would not refill before the end of my study period.

There was also the distinctive smell of death when we arrived at Kidney Springs. After wandering around sniffing the air for a half hour, we located a dead ram. I estimated the ram to be 4-5 days dead, given the putrefaction of the internal organs and the strong smell. There was no evidence of predation, and the carcass had not been moved since death. It appeared as though the ram had simply laid down and died. Given its advanced age (at least 10 years old), I suspected that the ram died from old age, dehydration, or malnutrition. Disease was also a possibility, and ear and nasal swabs were taken.

After hiking back and eating dinner, we drove to the starting location for the hike to Paiute Guzzler.

Wednesday: We completed the one and a half hour hike to Paiute Guzzler only to find it dry. Considering that Kidney Springs was also dry, I suspect that the mountain range had not received rainfall in a good while. We removed the camera, then hiked out. We saw two ewes and a lamb, but did not hear a mountain lion as we had on the previous hike to Paiute Guzzler.

We then drove to the Marbles and started in on camera maintenance there. Theresa Spring, Developed Seep, and South I-40 guzzler were all normal with nothing unusual to report. Both cameras at Vernandyles Spring were turned the wrong way; upon inspection of the photos, it was determined that sheep rubbing against the camera posts was the cause.

Vernandyles was also infused with the smell of decomposition, and we found a dead ram 20 m from the spring. This ram was located on the steep slope with its head facing downhill. There was a small, 7 ft tall cliff above the carcass. Scrapes were found in the ground above the cliff and a bobcat print was located on the slope at the same level as the carcass. There was significant blood at the base of the horns, suggesting a large blow to the head. Though unknown, my best guess as to the cause of death is that the ram was startled by a bobcat and accidently fell off the cliff onto its head.

Thursday: We woke up at 6:00 am and hiked up the landslide road to the Nancy Andrews Guzzler. As previously agreed upon, we collected fecal samples for a population estimate along previously-marked transects. After maintaining the camera, we traversed the mountaintop on a sheep trail to the Omya Mine Guzzler. There we found a group of 4 ewes, 1 lamb, and 1 category 2 ram. We waited for the sheep to leave the area before conducting our business.

After hiking back to the truck, we drove around the back of the mountains to the spring at Miller’s Cabin. There we found a group of twenty sheep who stood and stared at us for a long while. When we finally got bored of the staring game, we started walking and the sheep started. A coyote popped out of the bushes as soon as the sheep ran. I suspect that the coyote may have been stalking the group of sheep, trying to get his paws on one of the tasty, little lambs. We maintained the cameras, and collected more fecal samples for the population estimate.

Friday: After spending the night at Camp Cady Wildlife Area, we completed the four hour drive back to Bishop, California. 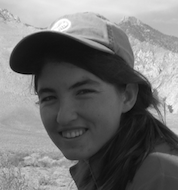 Danielle Glass, Western Resources Fellow | Environmental history has shown that we, as humans, have power over our surroundings. As such, we have the responsibility to construct stable, resilient ecosystems and the opportunity to promote engaging, productive landscapes. As a conservation biologist, Danielle is interested in advancing these ideas in the context of biodiversity conservation, spatial ecology, and human-wildlife coexistence. She is currently studying how surface water utilization impacts desert bighorn sheep (Ovis canadensis nelsoni) movement patterns in California’s Mojave Desert. See what Danielle has been up to.  |   Blog